In 2008, Lainie Diamond was living in New York and was wondering where her laughter went. She discovered a yoga instructor named Vishwa Prakash who wasn’t teaching the typical stretching and stances most people associate with the ancient exercise system for body and mind. He was teaching how to laugh, regardless of if students were in the mood. 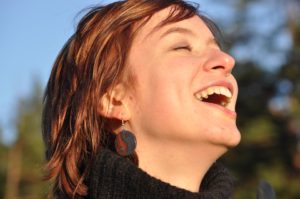 Laughter yoga is an exercise routine founded in 1995 by an Indian physician, Dr. Madan Kataria. Prakash studied under Kataria and began offering laughter yoga classes in New York. Diamond joined Prakash’s free class and- can you guess? Yes, soon she too wanted to help others find their laughter and became a certified laughter yoga instructor.

At its core, Diamond said, laughter yoga teaches people how to breathe. “We hear the phrase, ‘Just breathe,’ all the time,” she said. “Breathing is very important for the body.” As a professional singer, Diamond was already familiar with a variety of breathing techniques to help her achieve long notes. Through laughter yoga, she discovered the therapeutic value of breathing. “Music is my vocation and laughter is my life,” she said. “Breathing can be healing. Laughter helps oxygenate your body and can change your brain chemistry. ”

A report by the Mayo Clinic suggests that giggles and guffaws have a number of short- and long- term benefits. Laughter, according to the clinic, enhances the intake of oxygen, which in turn stimulates the body’s heart, lungs and muscles and increases endorphins released by the brain. Laughter is said to sooth tension by stimulating blood circulation. 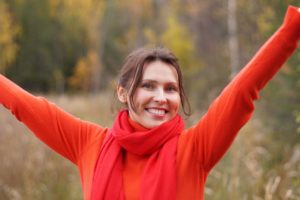 Whereas negative thoughts result in chemical reactions that can increase stress and decrease immunity, laughter creates positive thoughts that result in release of neuropeptides, which are a type of chemical transmitter, to fight stress and illness, the clinic reported. Other benefits of laughter can include pain relief, better coping skills and an antidote for depression and anxiety.

“The body doesn’t know a real laugh from a fake laugh,” Diamond said. “One of our laugher yoga mottos is, ‘Fake it ’til you make it.’ ” Just going through the motions with various “deep ho- ho-hos and ha-ha-has” can help oxygenate the body, she said. But, laughter yoga isn’t all laughs. Those who take (the class) are able to express laughter, anger and forgiveness through breathing exercises.”

The participants in her class are often seen moving around, sometimes hugging themselves while laughing silently or out loud. It may look funny, however, Diamond said they are learning breathing techniques and activating various muscles. Another benefit of laughter, Diamond said, is that it can serve as glue bonding people together socially. “The effects of laughter yoga can be life-changing for people and affects their careers, their family life and their relationships,” Diamond said.